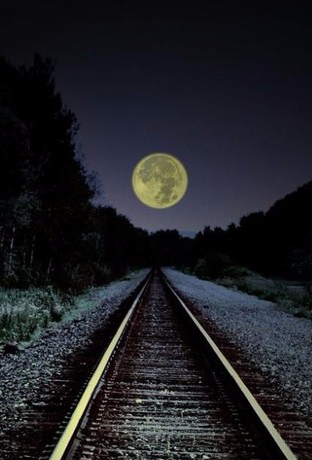 Prompt: She was walking down the abandoned, useless train tracks, over broken rails and bent metal… but then in the distance, she can see a headlight, and the unmistakable sound of a moving locomotive.

Looking up from the rails, she saw the train barreling towards her. She didn’t move her feet from the wooden beams she walked on. Her luminescent teal eyes didn’t falter as the blinding light from the train’s headlight consumed her vision.

She tapped her chest right above her breasts with her right pointer finger, then tapped her forehead with the other. Small whirling azure circles appeared above her brow and under her neck. She balled her hands into fists and let them dangle to her side.

The train’s horn flooded the night air. The conductor blew the horn again and again, and again, to no avail. The woman walking on the tracks didn’t move, didn’t look away, only faced what sped towards her.

Sparks like fiery wings spewed out from both sides of the locomotive as the conductor pulled the brake. It was too late, not for her, but for him and his machine.

The connection was made. The train collided with her body and then. . . it was gone. A brilliant blue wormhole opened up inside the woman’s body, swirled, twisted, blurred the lines between reality and what laid beyond. It absorbed the locomotive and pulled it into obscurity.

Silence fell over the scenery, not even the crickets chirped. The screeching of brakes, the blaring horn, the conductor’s cries — gone.

The woman continued to walk along the tracks. In the far, far distance, she could hear the faint horn of another locomotive coming her way.