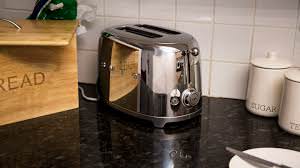 Prompt:”A haunted toaster?” “I swear, it’s real. You put something, anything in there, push down the thingy and in a minute the food pops up haunted. Toasted haunted. A toast ghost. Go on and try it if you don’t believe me.”

“So you’re saying if I put this bagel in, it’ll come out haunted?” Joe asked, sliding the two slices of a cinnamon raisin bagel into the toaster’s openings.

“Yeah, basically.” Tom, Joe’s friend, replied. A pile of crumbled toast sat on the counter near him, the smell of burnt bread filling the kitchen.

Joe pressed down the lever on the toaster. “What happens to them? Do they come out with horns, or glowing eyes, or do they float? What makes them haunted?”

What could possibly happen? he thought, turning to the toaster. A cold sweat started to form over him. Would his bagel come up with fangs, would it want to devour him and everything that he ever loved? Or would it pop out with sentience, glow with an eery aura and levitate, cause mayhem and mischief to everyone in the house for all eternity? Or would it end up like the things from those stories, would it become a Great One, a thing with unimaginable shapes, colors, thoughts?

The toaster dinged and the bagel popped out. Instinctively Joe grabbed them, and set them onto a paper plate. They… they… looked… normal? He bent and inspected them up close, finding no fangs, no ghost-like features, no tentacles, no nothing but dough. He smelled them, but they smelled fine.

“Hey, uh, Tom… There’s nothing different about this bagel.”

Joe shrugged, took up a slice and bit into it. His chewing became slower and slower until he stopped altogether.

Tom came over to him. “Taste different, huh?”

“That’s because anything that goes into that toaster comes out as bran.”

“Jesus Christ,” Joe said, with his mouth full. “It’s awful. We gotta get rid of this thing.”

Read my previous prompt, “The Demon of Wich.”