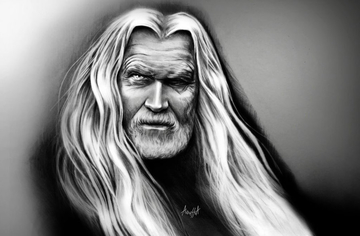 Prompt: The Gods returned, not with a dramatic entrance, instead they appear randomly giving advice based on whatever situation you are in.

As Michael sat on the toilet, hunched over and staring at the linoleum floor, he thought. I can’t believe this happened to me… Never thought it could, maybe other men, but definitely not me. Never had this problem before but now—

“It has happened to you,” a deep voice said next to him.

Michael jumped and turned to where the voice seemingly appeared, discovering an old man with an eye patch sitting on the rim of the bathtub. He wore a raggedy, hide cloak with its hood up, and a scraggily silver beard hung from his face to his chest. He smiled.

Michael glanced at the closed doorway, then back to the man. “Can you leave?”

The old man shook his head. “I do not believe so. I am here for a purpose.”

Michael turned away from him, looking at the ground. “I don’t have a problem you old coot.”

“I believe you do,” he said, nodding, “and it is nothing to be ashamed about.”

“Ye—” he began to say, thought better of it, then closed his mouth. Why am I explaining myself to this guy?

“In my time in Midgard, I had bed many maidens but not all could raise the strength inside me.”

“What did you do?” he whispered.

“I found it was a troubled mind than a troubled body that was the root of the cause.”

“You have been tired and busy, life and time has done that to many men greater than yourself, greater than I… Do not allow it to weigh heavy on your shoulders, for it will affect more than your body.”

Michael thought of working late, waking early; dealing with his parents, though he had moved out years ago; his packed weekends with friends, family, responsibilities he had to do, not ones he wanted to do… Everything swirled in his mind to form a maelstrom of exhaustion that wrapped around him like a lead blanket. It tightened, forcing down every ounce of energy or excitement he could possibly conjure until it was nothing but embers in a smothered fire.

He sighed, turning to the old man. “You’re right… Maybe it’s not for tonight… Maybe tonight’s just for talking.”

Michael stood, smiling. He went to the sink, and splashed cold water on his face. “Can I ask you a question? Before you leave.”

“Searching tirelessly for something that I should not have bothered with.”

“Sorry to hear that,” he said.

Michael opened the door, but before stepping out, he looked over his shoulder to find the bathroom empty.

Read my previous prompt, “The Devil Took It.”