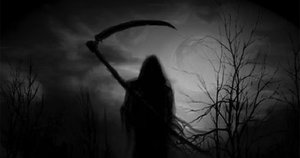 Prompt: As Death, you have seen many different reactions from those you reap. Begging, bargaining, trying to elicit sympathy, bribing, anger, pathetic attempts at wit and snark and so on. This one was different, with a magic sword in hand, they request a duel for a second chance at life.

“You raise a blade to me?” I asked the boy before me, holding a glowing blue sword, etched with ancient runes of forgotten lands.

The boy nodded, took a step forward. “I’m not ready to leave this place, Death.” He coughed and spit out a ball of black phlegm. The dark spit dribbled down his chin covered in boils. “The Plague might have me, but you won’t, not now. I will duel you for my life.”

“Duel?” I asked, my skeletal hand gripping the shaft of my scythe tighter.

A deep chuckle reverberated off the long, sinewy bones within my cloak. “Mortals don’t duel Death, you foolish boy.”

“But with this,” he rose the glowing sword, “I can.” He grinned.

“And where did you learn that from? An old, pale man, perhaps?”

His eyes widened for a moment, then he shook his head. “It matters not where I learned it from, Death, only that this will bring you to your knees!” he shouted, and ran towards me, plunging the sword into my cloak. It rummaged within the infinite depths of the damned, prisoned within my ancient bones. The blue glow ebbed and rose into my hood, illuminating a skull that hadn’t seen light in eons.

He grinned, looking up at me, continuing to push the blade deeper into the outline of my once human form. After a moment of no scream of anguish, no spilling of black blood, no being returned to the forgotten lands, he released the blade’s handle as though it were red hot and stumbled away.

“What,” he stuttered, “how are you not vanquished?”

I plunged my scythe into the damp earth, and took the handle of the blade and removed it from my body. “Because foolish boy, this blade was forged and crafted in the forgotten lands, the listless place between life and death, and stolen by a mortal who thought he was higher than all others with his inferior magic… A blade’s creator cannot be killed by his own blade.”

I shoved the blade into the ground, and picked up my scythe, raising it towards the boy who now trembled. The crotch of his trousers darkened. “But I’ll make you an offer, boy. If you bring me the man who gave you the blade, I’ll spare your life, for now.”

The boy nodded frantically, wiped the snot from his nose, stumbled to his feet and ran off to the village on the horizon.

I hunched into my cloak, allowing the warmth of the dead to permeate my cold bones, and waited.

Read my previous prompt, “The Eye of Cthulhu.”